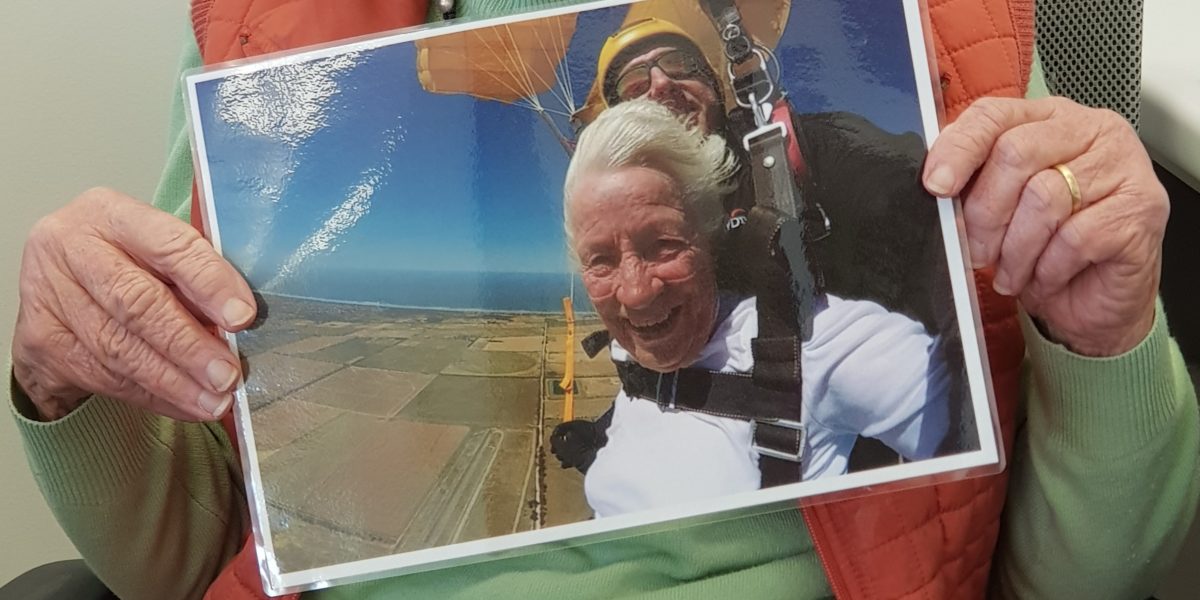 Joan Baker is a woman of action! At 90, she decided it was time to fulfil a long-lived dream of hers – to skydive.

“Once I told my family that I wanted to skydive, my three grandsons decided they wanted to come too”, explained Joan. “It was a bit scary. I was the first to leave the plane. The worst part was when my tandem instructor said: “Now, here we go”. But once we jumped, it was exhilarating!” 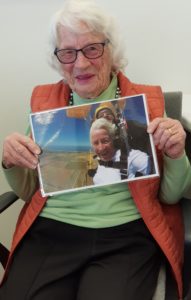 Always a keen traveller, Joan has been to many adventurous places – from Africa and to the Arctic Circle.

“After my husband John died, I decided I still wanted to see more of the world. I took group tours, which was a great way to meet people. I also flew across Antarctica. It was four hours by sea from the mainland, then four hours flying there and another four hours back with amazing views across the ice and snow”.

Joan was born in Brisbane. She spent her early childhood in Sydney after her father was transferred there for work. She met John Baker, married and later moved to Melbourne.

“My husband John was a manager at General Motors Holden. After some years in Melbourne, he applied for another position in the company and we moved to Adelaide.”

Joan, John and their three children settled well into their new South Australian home.  Always active, Joan and her family loved to go to the beach and surf, an activity she only recently gave up.

“I enjoy the beach, but it’s a bit harder to get around these days.”

For the last four years, Joan has lived happily in a retirement village in Kings Park.

“It’s good to have company and be around people the same age.”

Joan has worn hearing aids for around 10 years.

“My hearing wasn’t bad when I spoke to people face-to-face, but I had some trouble hearing in noisy, crowded places”.

She used to go into the city to have her hearing checked. When she found out that My Hearing had opened a clinic in Kings Park, she decided that this clinic was a more convenient option.

“The Kings Park hearing clinic is just down the road. Now I don’t have to travel into town, which is a lot easier.”

“I’m very happy with my new hearing aids. They’re a lot better than my old ones. And I like Dean the hearing clinician. He’s very friendly and does a great job.” 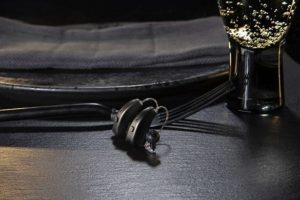 You can learn more about the Widex Moment hearing aid in this video HERE.  The devices are based on a listening platform known as Widex PureSound™. According to research, a majority of both new and experienced users prefer Widex PureSound across different sound scenarios. Widex PureSound™ makes a real, audible difference to users.

If you have any questions about your hearing health or if you’d like to know more about the special offer we have on Widex Moment hearing devices, please give us a call on 1300 970 558.