How to read an audiogram 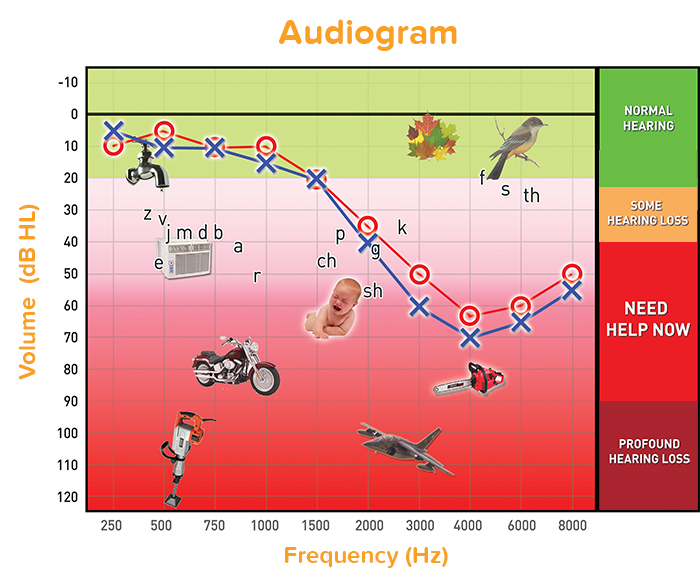 The Audiogram is the graphical representation of the results of the air conduction and bone conduction hearing tests.

The vertical lines represent the test frequencies, arranged from low pitched on the left to high pitched on the right. The horizontal lines represent loudness, from very soft at the top to very loud at the bottom.
The Audiogram shows the minimum volume at which a person can detect a tone played at a particular frequency. “X” is used for the left ear and “O” represents scores for the right ear. The scores are compared to results obtained from persons with normal hearing (i.e. the line at 0dB).

Sometimes the audiogram will also show bracket symbols “[” and “]”. These represent scores based on bone conduction tests, which as discussed earlier, bypass the outer ear and middle ear.

The lower the scores fall on the Audiogram, the more severe the hearing loss.

How the ears compare

“My hearing is pretty good other than for those high frequencies”

In interpreting an audiogram, it is a common for people to misinterpret the results ~ looking at the good news rather than taking in the whole story.

Low frequencies of sounds found in speech (125 Hz – 1000 Hz) are largely responsible for a person’s interpretation of the volume of speech. High frequencies are responsible for the clarity that someone interprets speech. Some of the high frequency elements of speech include those made by words containing letters such as “f”, “ph”, “th”, “s” and “t”.

Because these sounds are difficult for someone with high frequency loss to hear, they may often mistake what someone has said.
For this reason, many people with greater losses in the higher frequencies commonly feel that: “I can hear ok, it is just that people sound like they’re mumbling”.

Here we can see the Audiograms of three people:

Annie has a moderate hearing loss that is known as Presbycusis. This results from degeneration of the hair receptors within the cochlear due to the ageing process. Before she was fitted with hearing aids, Annie always found conversations with her younger grandchildren particularly difficult – especially when in a noisy situation. She also found telephone conversations difficult and noisy restaurants were the “bane of her existence”.

Bill has been on the tools for 40-years as a carpenter and admits to rarely using ear protection for most of that time. His sharply sloping loss in the higher frequencies can largely be put down to noise induced hearing loss produced by electrical saws and other equipment that he has used in his job.

David is currently suffering from a conductive hearing loss due to a nasty illness that has led to fluid gathering in his middle ear. He is not hearing very well at the moment and his ears are hurting and “feel tight on the inside”. This infection is causing a problem with the passing of sound through his middle ear, as can be seen by the Normal hearing scores he has from his Bone conduction tests, represented by the “[” and “]”, but impaired Air Conduction results.